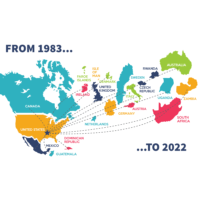 In celebration of the five-year anniversary of the launch of Keys to Freedom, we wanted to share with you how people are being impacted by this study around the world, and how this study can also benefit YOU.

When Keys to Freedom was written in 2016, none of us imagined that the entire work would one day be translated into another language. We certainly would have never guessed that less than five years later, the study would be available in five languages! In 2022 Keys to Freedom has now been translated into Spanish,  German, Swedish, and Danish. We know of at least 22 countries where the study is being used to equip people with the keys for living in freedom, including the United States, United Kingdom, Canada, Ireland, Netherlands, Sweden, Denmark, Germany, Czech Republic, Mexico, Dominican Republic, Uganda, Rwanda, South Africa, Guatemala, Australia, New Zealand, Austria, Zambia, Faroe Islands, Isle of Man, and Italy.

It only took a moment, though, to remember that the truths and principles shared in Keys to Freedom are straight from the Word of God. And if there was ever a book that crosses all generations, all cultures, and all languages, it’s the Word of God. We were confident that while a few examples and stories might need to be adapted to better connect with other cultures, the overall content of this study would powerfully impact men and women around the globe.

In Keys to Freedom, we share the principles of freedom that have been used within Mercy’s residential program for years:

It’s hard to imagine there being a human on the planet who doesn’t need to know how to do these things. Every person, no matter their age, gender, nationality, economic or academic status, has hurts that they need to address and lies they need to break. Everyone has someone who has hurt them, and everyone has patterns they’ve picked up from the generation before them that need to be broken. It is part of the human condition. It’s part of living in a fractured world. No one is exempt from needing these keys to freedom in their lives.

While Mercy has traditionally been viewed as a ministry for women, it has been amazing to see the Keys to Freedom study impacting the lives of both women and men. Jonathan Olmstead has led multiple groups of men through Keys to Freedom at his church in California and shared with us…

“Our first [“Keys to Freedom”] group was with a small number of us. Coming from other programs of recovery, I had seen how mending broken lives could help with the aid of Christ. As a recovering drug addict of over 25 years, gang member, and drug dealer, I had a lot of garbage and baggage. At this point, though, I was sober…

One of the biggest things I learned was that despite being sober, I was still broken. I had roots laid so deep within the ground, I assumed it was normal. Our first class saw our little group cry together, laugh together and most importantly, grow together. Roots were dug up, lies replaced with truths, and healthy boundaries established. Our relationships grew stronger with Christ than any time before…

“Keys to Freedom” was such a success that we ran it twice a year with multiple groups per session. It was not only a great gift of which to be a part, but to watch others grow spiritually, emotionally, and biblically…Having gone through several programs, this one is by far the most freeing. It addresses the root of the problem, which is the only way in which to achieve freedom. I would recommend “Keys to Freedom” to anyone… I tell everyone about it and the freedom it offers through Christ.”

Not only is Keys to Freedom impacting the lives of men and women in the United States, but it has also exploded across Europe! With over 17,000 copies sold in the UK alone, around 400 churches using the material in small groups, and translations now completed in three different European languages, there are pastors all over the continent sharing how impactful this resource has been for their church. The Mercy UK team has been leading the charge, traveling and training pastors and ministry leaders multiple weekends per month. Arianna Walker, CEO of Mercy UK, shares…

“It’s such a joy for us here at Mercy UK to reach so many more people through “Keys to Freedom” and to help churches from many different denominations and even different countries! We are seeing men and women from all ages and life stages really develop their relationship with God, with self, and with others and learn what it means to live free and stay free!”

We also know of Keys to Freedom study groups in a number of developing nations, including Uganda, Columbia, Rwanda, and the Dominican Republic. Global Effect is a ministry that serves impoverished communities in the Dominican Republic by equipping them to transform their socio-economic, physical, and spiritual well-being. Janet Marchany, Executive Administrator for Global Effect, recently took their leadership team in the D.R. through Keys to Freedom, and that team took 112 university students, 62 high school seniors and 7 more staff members through the study. Janet shared…

“We’re using “Keys to Freedom” as our discipleship curriculum. You have no idea how incredibly helpful it is to have the material in Spanish! We’re able to offer a quality curriculum, in our own language, that is God-centered. We have a psychologist and a counselor on staff. Both have expressed how they’re using the principles of “Keys to Freedom” to counsel students. It is so satisfying to be able to empower the staff to empower the students and those around them with Bible-based material.”

Witnessing the impact that this resource is having all over the world is a real testament to the timeless truths and principles in the Word of God. Jesus Christ is truly the same yesterday, today and forever – whether you are an executive in New York City, a stay-at-home mom in the UK, or a ministry leader in East Africa. We pray that the Lord will continue to do more than we could ask or imagine through His truths that are shared in this resource!