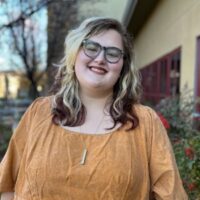 I grew up in a loving, Christian home and received salvation at an early age. My struggles with anxiety also began at a young age. The first time I self-harmed I was eight years old, but by 15, it was a regular part of my life. God healed me from all thoughts of harming myself after an interrupted suicide attempt at 16. Only a few months later, I returned to self-harm for what I believed to be comfort and control.

I attended community college before transferring to a university. Began behaving recklessly, not caring what would happen to me. I created what I believed to be a likable persona of myself to hide behind. Several people in my life began to tell me about this place called Mercy Multiplied, including my roommate, who just so happened to be a Mercy grad.

As my destructive behaviors grew increasingly obvious to those around me, I was told by the campus pastor that I needed to apply to Mercy. I begrudgingly began the form with few thoughts of completing it. A few weeks later, I was dismissed after leadership learned I had plans to end my own life.

After my dismissal, I continued hiding not just myself but my circumstances. When self-harm and disordered eating weren’t enough, I began using inhalants. I saw a therapist who just handed me back my problems in packages topped with labels. My self-harm drastically escalated, and I began new destructive habits to distract from the darkness in my mind. Depression was my jailor, anxiety my stalker, and shame and self-hatred my constant companions. I became fixated on a final plan to end my life.

One day the still small voice that I had pushed away for so long whispered, “What about Mercy?” I decided that if I wasn’t on a waiting list by January 20th, I would take my life. On January 18th, I received the call that I was accepted.

When I walked through the doors of Mercy, Jesus began whispering His steadfast love to me even though I held my hands over my ears. Staff chose unconditional compassion yet held a high standard. They tended to my wounds, listened without judgment, and held my tears.

Easter was one of the first times the truth began to transform from known to believed. I learned God doesn’t have to love me; He wants to. He would have gone to the cross even if I was the only one who needed saving.

I found Renewing the Mind to be one of the most influential practices in my journey. As I began replacing the lies with truth, there were many days when I didn’t believe a word I was saying, yet I chose to profess them over my life until I did. I know I am made worthy through Jesus, I am redeemed, I am seen, I am chosen, and I am pure in His sight regardless of my past. I rededicated my life to Christ and asked Him to be my Lord as well as my Savior and was baptized this summer.

God gave me a word from Isaiah, promising me that I would not be left broken. He said He would gather the pieces no matter how far they fell. With that promise in my heart and my counselor holding my hand, I began the messy work. As we wrapped up a particularly hard session, my counselor told me that just as Adam and Eve used fig leaves to cover their shame, the Lord was beginning to take away my shame, and I’m happy to report that’s just what He did. I have learned that He is always faithful to hold the broken pieces we surrender with loving hands of healing. In my time at Mercy, Jesus brought me out of hiding, freed me from shame, and loved my heart back to life.

After Graduation, I will be storming the castle of life armed with the tools I have learned at Mercy and an arsenal of hope. I am going to be returning home and restarting college classes in January.

One day I want to share my story with others to lend them hope in their own journeys. I also want to use my art and creativity in an impactful way to promote awareness and inspire contemplation of my Rescuer.

I wish I could personally thank each and every Mercy supporter. Without you my journey at Mercy would not have been possible.