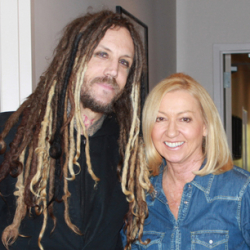 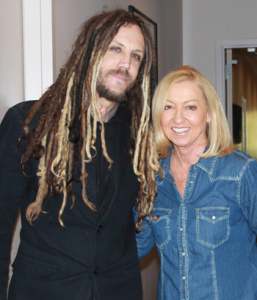 Brian “Head” Welch, co-founder and lead guitarist for the heavy metal band Korn, visited the Nashville Mercy home last Thursday. He shared with Mercy residents and staff his story of transformation from a life of fame and rock-and-roll excess to a life dedicated to Jesus.

The son of a banker and a nurse, Welch grew up in Bakersfield, California. He experienced bullying during his middle school years, but found an escape in rock music. At age 11 he got his first acoustic guitar, but soon developed a love for the electric guitar. Shortly after high school, he and some schoolmates moved to Los Angeles and started Korn. The band soon became a Grammy award-winning, multi-platinum phenomenon that dominated the top of the heavy metal scene in the late 90’s. As a part of Korn, “Head” received six Grammy nominations, winning two, while selling 40 million records worldwide.

Welch shared that when he was 12 years old, a neighborhood friend told him about Jesus Christ. Welch prayed and accepted Christ as his Savior at that time, but didn’t understand what that truly meant and continued to live his life without a relationship with God. When his daughter was born years later, Welch remembered feeling and being drawn to God’s undeniable presence, but the darkness of his rocker lifestyle continued to dominate his life.

Even having attained the highest levels of human success in his rise to fame and fortune, Welch felt deeply unsatisfied and empty. He said, “As the success was coming and growing, my soul and emotions became darker.” He turned to all kinds of drugs to cope, and eventually became addicted to crystal meth. All the while he toured, sold records, and made feeble efforts to balance his roles as a husband and dad.

After a failed marriage and many failed attempts to quit drugs on his own, Welch was exhausted and longed for something to fill the deep void in his life. In 2005, a friend invited Welch to church and shared the words of Matthew 11:28 with him:  “Come to me, all you who are weary and burdened, and I will give you rest.” Welch said this verse opened his eyes and gave him what his soul was longing for: rest in Christ. That night he cried out to the Lord and felt Christ’s presence wrap him with invisible arms and tell him he was home. “I felt like I was home for the first time,” said Welch.

From that moment in 2005, Welch has been free from drug addiction and has dedicated his life to Christ. He resigned from Korn for a time, but has since rejoined the group. He has authored several books to encourage those struggling with substance abuse, despair, and crises of faith. Above all, he is striving to be the best father he can be for his daughter.

The Mercy residents were greatly inspired by Welch’s personal faith journey. Many found encouragement through his emphasis on pursuing Christ relentlessly and knowing Christ intimately. Here’s what some of the residents had to say:

His story was amazing and encouraging. I love that he is so real and passionate about knowing God. His passion inspired me to seek God even harder. –Grace

Brian really inspired me to seek God, no matter what I am going through in life. He said to pray, read your Bible, and fellowship with other Christians. For someone to make it to the top and have made it in the world and still feel empty, encouraged me and my relationship with God. –Jessica

I loved hearing his testimony of how just drugged out he really was and how he just surrendered it all to God. It just lets me know that God can do anything. –Brittini

His story is so crazy! He really is so passionate and loves God. It really makes me want to press in and keep going and shows that God can do all things. –Ashley

Mercy is grateful to Brian “Head” Welch for his willingness to share his story and help people come to know the love of Christ. For more information on Welch’s music and outreach, visit www.brianheadwelch.net.