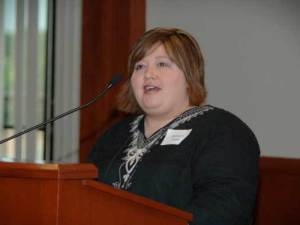 When I was four years old, a family member began sexually abusing me. He was into satanic ritual abuse, and it continued until I was 14 years old. During that time, I had one abortion and a miscarriage. As a result of the abuse, I began using drugs and alcohol just to get through the day. At age 16, I attempted suicide for the first time, and at 20, I entered the first of many secular treatment centers. I spent the next eight years in and out of treatment centers for suicide and chemical dependency. I was in a treatment facility when my counselor told me I had only 10 days left on my insurance and would need to make other arrangements. I had lost my job, apartment and every friend I had no longer trusted me. I had heard about Mercy at a Point of Grace concert, and Nancy Alcorn had spoken at my church. With nowhere else to turn, I decided to apply to Mercy, and they accepted me into the program.

While at Mercy, God’s love was poured out on me. The staff, teachings and church showed me the truth of God’s Word and the love that God had for me. It was the first time in my life that I felt unconditionally loved and valued. Because of the love of God and His mercy, grace and healing touch, I was completely set free from my past.

I have been married to a wonderful man for the last six years and we have applied to adopt a baby through Mercy’s licensed adoption agency. We are so excited about the next chapter of life God has for us. It is because of the faithfulness and willingness of Mercy’s supporters to give that my life was transformed. Thank you!