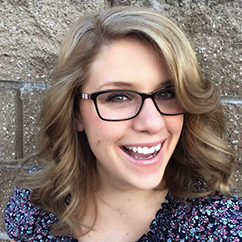 Before Mercy, I was mean, manipulative, and hated myself. I was convinced I was unlovable and my feelings of abandonment and rejection led to addiction, depression, self-harm and an eating disorder. I should have died on several occasions, and God showed me great mercy and performed miracles on my behalf through it all. I came to know the Lord after being arrested for possession of heroin. I accepted Him by diving in to Christian community and letting go of old friends and negative influences.

I had first heard about Mercy through a friend and decided to go to an open house at the Lincoln home. During the open house, I instantly felt that God was speaking to me about coming to Mercy. Soon after, I applied to Mercy and was accepted into the program.

When I arrived at Mercy I was terrified of myself and was still being tormented by the enemy. But during my time at Mercy, I learned I had a choice. Our days were very structured and there were many rules. However, the security and safety I felt at Mercy helped me understand the freedom that comes from standing on the Lord’s solid foundation. The staff were caring and kind, honest and bold, and Holy Spirit directed. I learned a lot about submission, which in turn taught me how to submit to the Lord even when I don’t understand what He’s doing. I was taught about my identity in Christ for the first time. I was so deceived that my worth, value and ability to be loved were based upon my actions. I now know that my value and worth is based upon what Jesus did on the cross. I learned about the power of my words and how important it is to bridle my tongue. And just as important, I fought and continue to fight to take every thought captive and make it obedient to Christ. My thoughts are where the enemy tempts me with lies. I learned to be patient with myself, as a major obstacle for me was learning to be patient with my growth and to allow myself to make mistakes as I work out my salvation with fear and trembling. Within that, I needed to learn to trust God’s sovereignty. He will work everything out for the good of those that are called according to His purpose. I would always joke that I learned more scripture and received so many fresh and vibrant revelations from the Lord during my time at Mercy than most Christians discover in a lifetime.

After graduating from Mercy, I began the process of walking out my freedom, and not returning to my old ways. I knew that freedom was possible for me, and I never gave up fighting for it. I have been on mission trips to Fiji, Boston, Las Vegas and San Francisco. I served as a leader in the young adults’ ministry at my church and worked for a time as the Administrative Assistant to our Lead Pastor. Recently I returned to school to obtain my nursing degree, a dream I was called to while at Mercy! I have continued to grow and reach new levels of healing since graduation. I couldn’t have done it without the foundation I gained at Mercy.