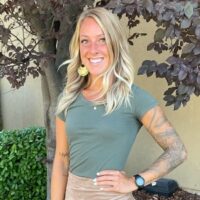 I grew up in a God-honoring and loving family. I attended private schools for most of my life. While I was attending Bible College, I was working in the restaurant industry. One night after a late night close, I was sexually assaulted by the manager on duty. That was the beginning of my shameful secret keeping. Shortly after, I found myself in a relationship with an old coworker who, for the next six years, would abuse me emotionally, physically, sexually, and psychologically. In this relationship, I was forced to participate in perverse acts in order to atone for my flaws and my grievances and was accused of many vile things and for having ill intentions. I learned early on to keep silent when I felt afraid, and every accusation made me more and more unsure of who I really was.

In 2017 I was diagnosed with PTSD and an anxiety disorder. Although some things did help me navigate some of the painful memories, the emotional agony that accompanied the loss and grief stayed with me. Even on the better days, my atmosphere was completely supercharged by fear. I started dating another man in hopes to escape, but it only perpetuated the shameful cycle and the secret keeping. I began to receive violent threats and blackmail in 2021, and the only thing that could buy me some temporary relief was cultivating a state of denial. I used drugs and alcohol to keep myself away from the threat that my own conscience had become. After several months, I tried to take my own life. I applied for Mercy in desperation for a place of safety.

When I first walked into Mercy, I was met by many people who were willing to fight for me when I had no fight left to give myself. Up until that point, all my energy had been expelled just merely trying to survive, and I was exhausted. It was early on in my Mercy journey that I realized that God wanted to heal a lot more in me than I believed was broken. I hardly felt like a person anymore, and although I wanted to do everything I possibly could to avoid the emotional agony that accompanies loss and grief, I knew that to heal, I had to dig up everything that I desperately tried to bury. Much of my journey was a work of unbecoming, an undoing of everything I’d been conditioned to believe about myself and about my circumstances. But the Lord graciously sifted through my heart and ripped out everything that had prison’s label on it.

Learning to forgive was the most difficult but the most rewarding key for me. I learned early on that you always pay the price for what you keep. I got so sick of bitterness flavoring everything in my life that I finally let it go. Forgiving myself has been one of the hardest things that I’ve ever had to do, but being able to sit with myself and not hate what I see or feel is absolutely liberating. I spent a lot of time before Mercy and even within my Mercy journey navigating the self-defeating heartache of being misunderstood. I believe it to be the loneliest place on earth to feel like no one speaks the language of your pain. But I found continual comfort in the Lord being Adonai El Roi, or “the Lord Who Sees.” Because even if no one ever speaks my language, the Holy Spirit can interpret even the inaudible utterances of my soul, even the ones the human language doesn’t have the words for.

The Lord has taught me that He will always meet my greatest needs and that I can never rely on others for what only He can fill. I’ve learned that I cannot buy forgiveness with guilt and that, at the end of the day, my healing can never depend on someone else doing the right thing. Experience is a harsh teacher, but I now know the Lord in a way that no one can take away from me. I have the wounds to prove that I fought, but I survived. And for the first time in over six years, I am okay with the company of my weaknesses because they don’t threaten me anymore.

To someone in the application process, I would say that it will be one of the hardest things that you will ever have to do, but it will turn out to be your greatest investment.

Because of the donors, I was able to find healing in a safe and uplifting environment. The tools and resources we receive while in Mercy’s care are immeasurable, and without this environment, I would have never made it through.