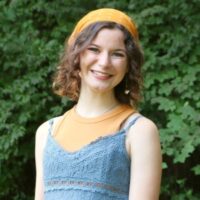 From a young age, I felt trapped, isolated, and surrounded by chaos due to the environment I was living in. I can remember feeling alone, unloved, and unseen as I watched everyone around me busy with my other siblings or other circumstances for most of my childhood. Because I didn’t know how to process all that I was feeling and going through, I would often react in outbursts of anger and rage. This strained my relationship with my parents.

In high school, I switched schools several times, and over six years, I went to five different schools. I tried so hard to please everyone around me for such a long time that I lost myself in the endless cycle of trying to be someone I wasn’t. Not only was I dealing with things at school and at home, I also dealt with sexual harassment, mental abuse, and verbal abuse. Through this, I battled with depression and anxiety. In the ninth grade, I started self-harming in order to feel something other than the constant pain and hopelessness. During the next five years, my mental health plummeted, and hopelessness overwhelmed me to the point that I didn’t want to live.

Later, I ended up with a broken arm as a result of my self-harm. My parents and I were constantly fighting, and they soon informed me that I could no longer live with them if I didn’t change how I was behaving. I didn’t know how to explain that I was functioning out of a deep hurt, and I didn’t know how to change or if change was even possible for me. I knew God was with me and in control, but my circumstances overwhelmed and surrounded me in such a way that I believed I had somehow pushed myself out of His reach. I fell even deeper into my depressive state. I clung to whatever I could in order to stay afloat, including self-harm, sexual immorality, and the approval of others.

Thankfully, my sister mentioned that she had heard of a residential counseling program that she thought would be a good option for me. At the time, I was so desperate and broken down that I was willing to try anything. I was completely convinced that I would never have a real future.

My process at Mercy has definitely been filled with its ups, downs, and in-betweens. There were many times that I questioned God’s plan, and I would cry out to Him in desperation and confusion. But each time I cried out to Him, He met me where I was and would guide me through it and draw me steadily closer to His heart. Fear had controlled me for so long that I had tried to control those around me and my circumstances. To my surprise, I learned that true safety and consistency will never be obtained by control but is found by surrendering all I am to the One who holds my past, present, and future in His completely capable hands.

As the Lord drew me closer to His heart, I saw that His love for me was a reliable, radical love that is completely trustworthy and remains unfazed by circumstances. At Mercy, I was immersed in truth in a way I had never experienced before, and over time, my heart started to open not only to the possibility but the assurance of freedom for my life and hope for my future.