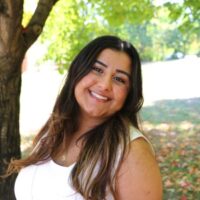 Growing up, I was filled with the feeling of being an outcast and not belonging. I am Egyptian, but I was raised in California.

In Egyptian culture, women should not be louder than men. Certain phrases that I would hear at school did not translate well into Arabic and therefore sounded rude to my parents. But the biggest thing that I had to cope with was being a female in a male-focused culture. In Western culture, specifically where I lived, women could be loud, extremely independent, feminist, and provocative. In Egyptian culture, being a woman meant dressing with the mindset of hiding your body. Raising kids was one of your job descriptions, and making decisions was not. Coping with going to a church filled with Egyptian-focused culture and a school with Western culture was a struggle and made me feel rejected.

This feeling of not belonging anywhere turned into self-punishment. I felt like everything that happened to me physically and emotionally was my fault. Every time I was excluded or the outcast in a group, I felt like it was my fault, and I was meant to not belong. So, I would self-harm to numb the ache in my heart. This ache followed me everywhere… anything that went wrong led back to this aching feeling that something was wrong with me.

I began to struggle with misusing opioids, major depression, and most of all, self-harm. As my struggles became unbearable, I began to lose myself and wanted to give up. My future wasn’t clear, and I didn’t know if I would even have one. But the mustard seed of hope in me said to try one more time. So, I sought out counseling programs again. This time I took an amazing mentor’s opinion and did an interview with a Christian counselor. He recommended I go to another intensive outpatient program, but I couldn’t fathom spending tens of thousands of dollars to do that. But I knew he was right; I needed intensive care, but I didn’t know how I was going to get it. Two weeks later, a former neighbor who knew my struggles called out of the blue to tell me about Mercy.

When I walked through the doors of Mercy, I was so scared. In my first few weeks, I had to remind myself that this was my decision. I was often told, “God won’t heal what you don’t approve Him to heal.”  I was often told by staff members and residents that they saw a change in me, but when asked if I saw it as well, I always answered, “No, not really.” Well, now I can truly say that I have seen so much change in my life. First, I learned forgiveness is dismissing a debt, releasing your resentment, and releasing your right to hear “I’m sorry” or your right to get even. It’s freeing and allows you to have joy and peace.

I learned to renew my mind. I renewed my mind by speaking the truth and canceling the  lies that the enemy brought against me. I learned that prayer looks different for everyone, and when you’re stuck, pray in the Spirit. I learned to stop blaming myself when I was not at fault, and that the enemy brought that shame and guilt into my life. I started seeing a bright future, one without hiding. I was also renewed by the blood of the Lamb, and I surrendered my life and became a new person in Christ. “The old life has gone; a new life has begun” ( 2 Corinthians 5:17). I now not only talk to Him about my past, but my present and future as well. Before Mercy, when therapists asked who my best friend was, I would say self-harm, but now my best friend truly is my Heavenly Father.

After Mercy, I plan on finishing the last semester of my associate degree. I would like to become a psychiatrist.  Most of all, I plan to share my testimony and how God has transformed my life.

This program was the only one that provided me with true healing. They focus on healing though God, and I truly became a new person in Christ. (2 Corinthians 5:17).

My Heavenly Father told me He has been running after me as a lost sheep, and He left the 99 to come find me. Now my Father is throwing a party, for I am found, and I plan to stay intimately close to my Father on my new journey for the rest of my life.