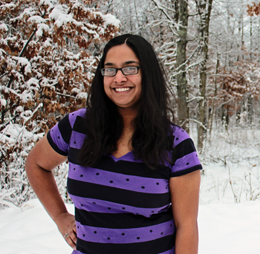 I was born in India, but adopted as a child and brought to America. My home life here was still very unstable, even physically and emotionally abusive. As a young child, I had to learn basic survival skills to protect myself and my younger sister, but on the inside I was dying. By the time I was 11, I was already contemplating suicide. Although I had been introduced to Christ by some friends, as a teenager my relationship with Him was as up-and-down as my home life was. I had not yet worked through the pain of my childhood, so destructive behavior like drinking, drug use and self-harm consumed my life over the next 10 years.

I went to counseling and to treatment, but none of it seemed to make a difference. At my lowest, all the professionals were ready to give up on me and predicted I wouldn’t live another year. Thankfully, my counselor asked me how serious I was in getting help, and I realized I was desperate for change. A few days later, I found the Mercy website and applied. I admit, I was still skeptical that the program at Mercy could actually work, since nothing else had. But, as it turns out, going to Mercy was the best decision I ever made.

While I was at Mercy, God showed me that He held me in the highest value and that He could be my safe place. This was a big shift since I hadn’t felt safe or valued growing up. He also showed me that no matter what I had done before I got to Mercy, He still wanted me. He still wanted to do amazing things in my life. With God’s help, I was able to find freedom from every destructive pattern and declare life in Christ over myself. God used the Mercy staff to love me, to pray for me, encourage me, care for me, and keep me safe, which made a huge impact on me. The staff gave me a sense of family and helped me allow God to use other people in our life. Their love actually made me feel worthy of the things He wanted to give me, while before Mercy, I felt worthy of absolutely nothing.

Since graduating from Mercy, God has opened the door for me to study film, a longtime passion that He reawakened through Mercy. I believe He has instilled in me a gift to tell stories in a way that connects with hurting people. I want to make Him known through the talents He’s given me! I’m currently going into my third year of film school where I have gained several opportunities to learn the art of film production and theoretical analysis. I will be going from here to graduate school, where I will obtain my teaching credentials to teach film history and aesthetics at the college level, hopefully lining up production work in between. I have never felt more alive than I do now, and I thank God every day that he brought a broken, dying girl in the Mercy doors, only to bring out a whole, healthy woman who is not afraid to dream big.