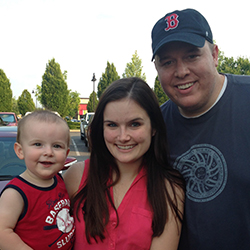 In a few months, I expect to be speaking at your funeral.

The psychiatrist sitting in my hospital room said those words as casually as if she were talking about the weather or her travel plans. If she was trying to scare me into changing my behavior, it didn’t work. I had been struggling with an eating disorder and depression for years, and I had just dropped out of my dream school a few days earlier to seek treatment. I already felt like I was fighting a losing battle, and her words extinguished whatever small flame of hope was left inside me. Over the following months, I bounced in and out of the hospital, going through the motions of the treatment process until insurance kicked me out, then going right back to my old behaviors until I was “sick enough” to be readmitted. I began to wonder if maybe the psychiatrist was right about me. Should I just give up? I remember asking my medical doctor if total freedom from eating disorders was even possible. Surely she would have an unbiased, medical perspective. “Maybe for some people,” she said, “but not for you.”

Thankfully, God had different plans for me. That spring, I was accepted to attend Mercy Multiplied. The moment I walked through the doors, I knew it was unlike any place I had ever been before. Coming out of a secular treatment program that cost $1,500/day, it blew my mind that Mercy offered help free of charge, with no strings attached.

The next six months were incredibly challenging, but as I began to reconnect with God, I learned to see myself as He saw me. Instead of putting a Band-Aid on the behaviors themselves, Mercy focused on treating the root of the problem—restoring my broken identity. Two Bible verses that I held onto were Ecclesiastes 3: 11, “God has made everything beautiful for its own time,” and Esther 4:14, “And who knows but that you have come to your position for such a time as this?” I knew that if I truly believed in God, I had to accept my identity in Christ. He said I was beautiful and valuable, and slowly I began to believe it.

Where psychiatrists and doctors saw only death, God has restored my life. And here’s my favorite part: He’s now used me to bring another new life into the world. My son Elijah was born on St. Patrick’s Day, and while some may call that “lucky,” we have another word for it: blessed.