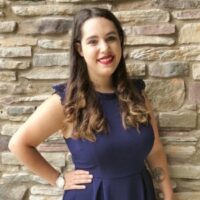 I grew up in a Christian family, with all of my friends and family also being Christian. The earliest memories I have are all loving memories, but the one thing that was always missing was my dad. He was not in a lot of my memories because he was always working to support our family. Though I do not blame him, not having that time to build a relationship with him did cause me to have feelings of abandonment and rejection. I noticed this first in grade school when I would have a best friend, and if she had another best friend, I would get very jealous and upset. The absence of my dad had caused me to have an unhealthy attachment to people who I had any kind of relationship with. As I got older, that played a part in romantic relationships.

When I was sixteen, I fell in love. We would spend every moment we could together. We dated for about a year and a half and thought I had found the man I was going to marry. When we broke up, it crushed me. I blamed God for taking him away from me, and I turned my back on Him because any God who could let something that bad happened to me obviously could not love me. I then started on a destructive path of men, drugs, alcohol, and self-harm. This went on for seven years. I would meet a guy, and I would be happy. Then when we would inevitably break up, I would go back trying to numb the pain with whatever worked. This reinforced the feelings I already had of abandonment and rejection. Every time they left, they took a piece of my heart with them. This led me to self-harm because I wanted to feel anything besides emotional pain.

I applied to Mercy when my last toxic relationship ended, and I was in a pit of depression. When I first was accepted, I felt this feeling of calmness and relief wash over me, but I brushed it off as nothing. I felt like my parents saw me as a problem that needed to be fixed, and Mercy was a place that wanted to control me. I felt like the whole world was against me.

When I first came in, I felt like an outsider, but as time went on, I started to feel accepted. Something I enjoyed the most was the choosing to forgive and healing life’s hurts teachings. In choosing to forgive, I learned how to forgive myself so I could forgive others. In healing life hurts, I went and healed the hurts in my past that I had never really dealt with before, which helped me cut all the strings that were holding me back.

I felt God calling me more than ever before, and so I rededicated my life to Him. I felt different, but I didn’t think anybody else would notice. I thought of it more as an internal thing than an external one. But the staff was saying now there was a light about me. I wasn’t the same person I was before. I’m proud to say the light of Jesus shines through me. I look down at my scars and they remind me of my life without Jesus and how broken I was. They are a reminder never to go back. I am rising from the ashes of my old life and starting a new one with Jesus by my side.

Thank you to all the donors for everything you have done for me. It truly has changed my life and you have no idea how much you have blessed me!